News broke yesterday that the Chinese Communist Party (CCP) formally started an antitrust investigation of Alibaba. The stock plummeted by more than 7% in after and pre-market trading. This is the latest development in the ongoing story of a deterioration in relations between Alibaba and the CCP following Jack Ma's harsh criticisms of China's financial regulators on stage at a Shanghai conference in October.

Read on for an analysis of the relationship between CCP and Alibaba and whether BABA is a buy, hold, or sell after this news.

China's State Administration for Market Regulation released a very brief statement declaring that it has begun an antitrust investigation of Alibaba over suspected monopolistic conduct including the "picking one from two", or "二选一" policy. This policy forces online merchants to sell exclusively on one platform and is actually widespread in China's ecommerce market.

Alibaba responded publicly with an equally brief and terse statement.

"Today, Alibaba Group has received notification from the State Administration for Market Regulation that an investigation has been initiated into the Company pursuant to the Anti-Monopoly Law. Alibaba will actively cooperate with the regulators on the investigation".

There are three scenarios that can play out, ranging from mild, moderate, to severe. The following is a high level summary of each with a conclusion on what I believe is the most plausible outcome.

The CCP is simply seeking to teach Jack Ma a lesson in humility. The antitrust investigation results in minor changes to the regulatory oversight of Alibaba and perhaps even a small fine. Jack Ma falls back in line and business as usual ensues.

This outcome implies buying BABA on this dip.

To preserve it's own interests and validity, the CCP is seeking to make a strong example out of Jack Ma and his companies. This is just the start of a long string of bad news between the CCP and Alibaba to inflict maximum pain on Jack Ma. A potential outcome for Alibaba could be heavy fines and heavy regulatory oversight that effectively sacrifices Alibaba in favor of more obedient domestic firms.

This outcome implies selling BABA and trimming exposure to other Chinese companies until new information emerges suggesting that relations are improving.

VIEs are a legal grey area under Chinese law. In 2015, the CCP drafted legislation banning them but didn't follow through. In 2019, they approved legislation with an updated definition of what is considered foreign investment that conveniently doesn't mention VIEs. This was interpreted as an implicit approval. Why wouldn't China approve of VIEs given that they are a significant source of foreign direct investment in Chinese companies? However, not mentioning VIEs also keeps the CCP's options open to pull the plug whenever.

As it pertains to the current spat between Alibaba and the CCP, a possible outcome is the CCP banning VIEs and effectively ending foreign ownership of domestic companies. All Chinese companies listed in the US would have to be delisted.

What's the most plausible outcome? 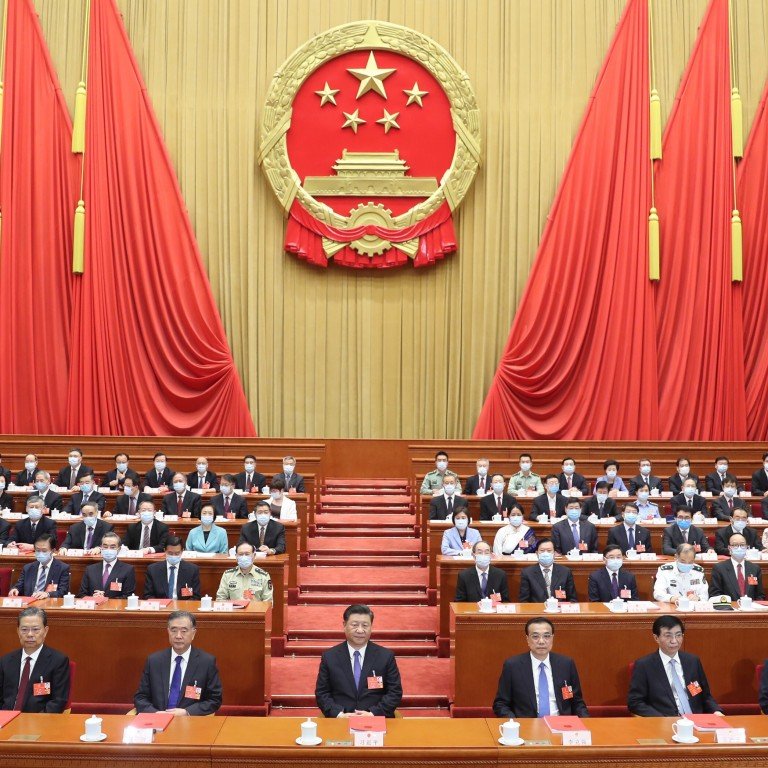 To the market, given everything that is known, the most plausible outcome is the Moderate case. This is as much because of the information at hand as well as the lack of information. What we know so far is that relations between Jack Ma and the CCP have deterioriated. What we don't know is how severe the deterioration is and how much pain does the CCP want to indirectly (and perhaps directly) inflict on Jack Ma through his corporate empire. So far, there is no indication that the CCP is getting off the case of Jack Ma and this presents significant risks for institutional investors. To make matters worse, the CCP acts on the behest of a single person, Xi Jinping, and a single person's opinions and actions are much more volatile than a commitee's. This only adds to the uncertainty of the present situation. What do institutional investors do in the face of uncertainty? They sell for safer bets.

A common argument against the Moderate case is that China is unwilling to hurt its geopolitical crown jewel. Alibaba is a key piece in China's strategy to satiate its hefty appetite for global soft power and the CCP hurting Alibaba beyond any surface wounds only hurts itself. The fall of BABA collapses the credibility of Chinese companies internationally and reduces foreign direct investment in China. On the surface, this argument holds weight but there are several holes. First and foremost, as much as the CCP desires to project global soft power, its number one priority is maintaining domestic power and legitimacy. There is little information on how much of a threat Xi perceives Jack Ma to be and again, this lack of clarity by itself gives weight to the Moderate case as far as market sentiment is concerned. Secondly, Alibaba is not the only Chinese multinational company that can continue to increase China's soft power projection. Tencent is a peer to Alibaba in terms of market capitalization and international influence and don't forget there are many other smaller companies waiting in the wings. As such, it's unlikely that market sentiment will veer towards the Mild case over the Moderate case.

Finally, the market doesn't believe in the Severe case. VIEs have been significantly beneficial to the CCP in terms of foreign direct investments and soft power projection. Banning VIEs will destroy the CCP's credibility and hurt international investments in China for years to come. 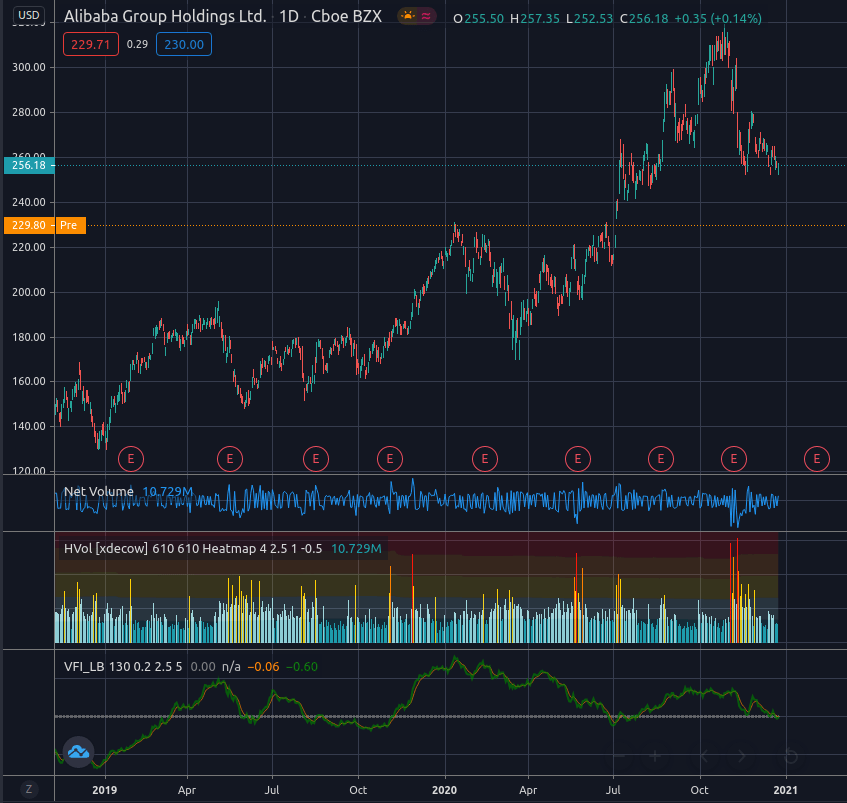 BABA is a sell in the short term until the uncertainty begins to clear. Institutional investors will be trimming their positions and selling as soon as they can. Although there will be a segment of retail investors trying to catch a falling knife, their buying volume will be dwarfed by the rest of the market's selling. In addition, BABA's fall coincides with the year-end tax-loss harvesting period where investors sell underperforming assets to reduce the next year's tax burden which is even more impetus for selling. In terms of price action, BABA will probably consolidate after the massive drop overnight. There will be a short term relief bounce during this consolidation so selling the top of this bounce is ideal. After consolidation, if the situation doesn't change, it'll form a descending price channel to a prior support level (e.g. $200).

In the long term, I believe that BABA will do well and long positions should be established the moment clarity starts to form and BABA has consolidated at a lower support. I personally believe that the CCP isn't interested in significantly hurting Alibaba and is really targeting Jack Ma. Given that Jack Ma has given up the reigns of the company, the CCP has little to gain from inflicting more than surface wounds on Alibaba. As always, personal beliefs should be separated from overall market sentiment.

FinanceTLDR
Software Engineer and Finance Blogger
"An investment in knowledge pays the best interest." - Benjamin Franklin
Continue Reading
Simple but Comprehensive Starting Guide to Trading
By FinanceTLDR
Posted over 1 year ago
What The Heck Is Going On With The Oil Market?! Negative Oil Prices...
By FinanceTLDR
Posted about 2 years ago
Simply Explained: Wealthfront's Risk Parity Whitepaper
By FinanceTLDR
Posted about 2 years ago
Contact FinanceTLDR
Subcribe to the Newsletter!
Get FinanceTLDR articles the moment they're published, straight to your inbox. Bringing you high quality stock market research with easy-to-read explanations. Learn what stocks we're interested in and why we see potential.
Subscribe For Free
"The biggest regret in life is not trying and failing, but not doing or knowing what you should've."