FinanceTLDR
Software Engineer and Finance Blogger
"An investment in knowledge pays the best interest." - Benjamin Franklin
How to Get Rich Trading (without getting lucky)
This Is the Next Tesla. Here's Why
What Happened With SNAP's Earnings (-26%)
View All

Zillow is the largest online real estate marketplace company in the US. Its market dominance and the home-buying surge from low interest rates and massive fiscal stimulus during the COVID economy resulted in a record 201 million average monthly unique users in Q4 2020 (source) and an equally impressive surge in stock price from around $35 to over $135 in under a year. 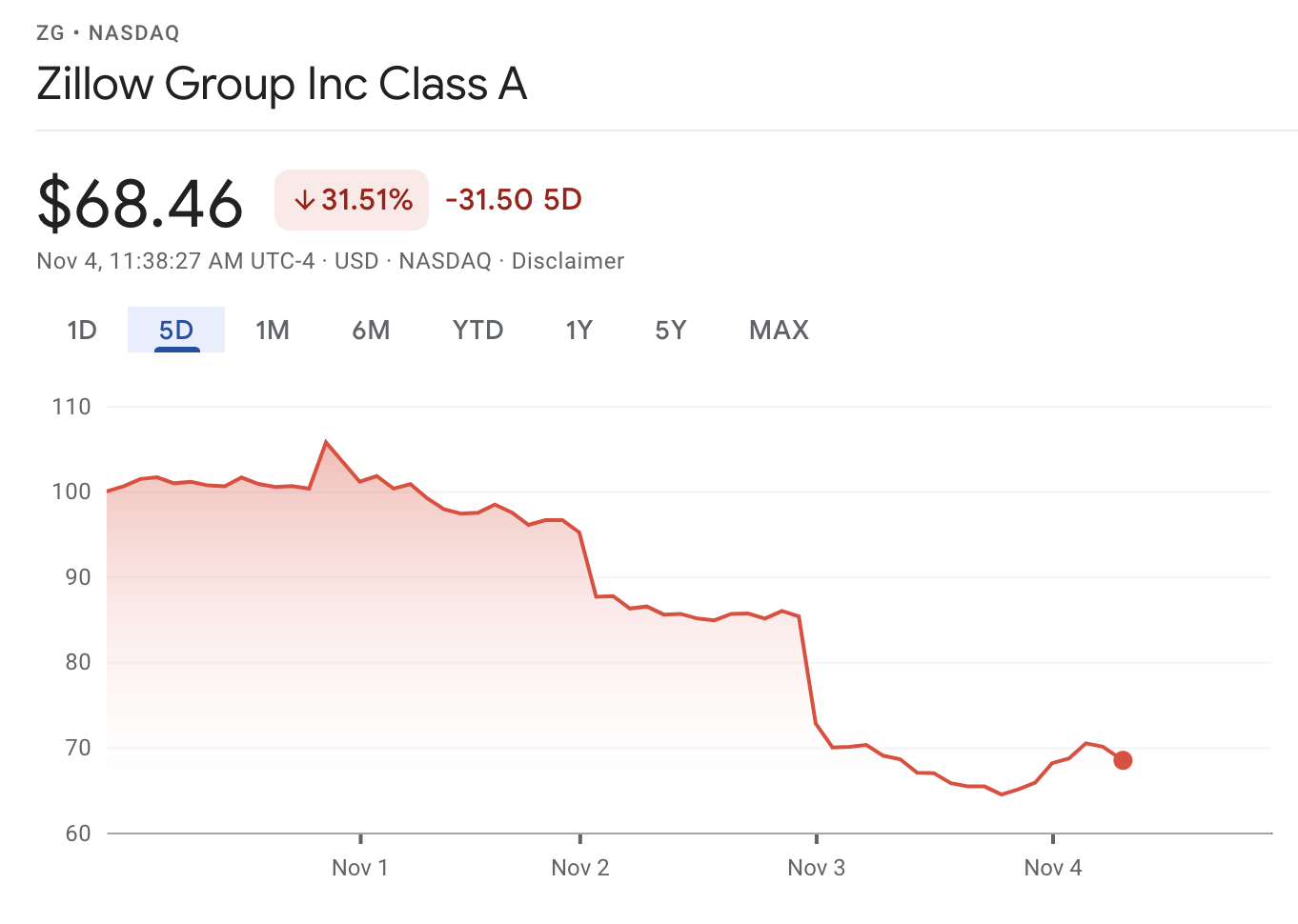 Zillow's COVID-induced boom was shortlived, though, as it revealed a possibly $550 million loss from its Zillow Offers division in its Q3 2021 earnings report. In addition, it'll shutter Zillow Offers and layoff 25% of the company's workforce.

Zillow Offers is Zillow's iBuying business, focused on taking advantage of Zillow's wealth of market data to find and buy underpriced homes, and sell them for higher. However, in 2021, Zillow Offers started drastically overpaying for homes... eventually sitting on a massive inventory of overpriced homes that became untenable for the business. Zillow now plans to unwind this entire portfolio in one go, predicting a write down of up to $550 million.

This is how and why Zillow Offers failed, and how it could've been prevented.

Why did Zillow Offers fail?

Zillow Offers tried to be a market maker (MM) in the real estate market. MMs are on both the bid and ask sides of a market, and make money via the spread (price difference) between the bid and ask. As such, MMs prefer low volatility and high volume. For example, Zillow constantly reiterates in its earnings report that it targets an average 2% profit on each home it flips. This is a modest number that reduces risk, yet at high transaction volume can bring in large profits.

In today's information age, most MMs are largely automated via computer algorithms.

The greatest challenge for MMs is high volatility. If prices start moving violently, any buy or sell could be risky and an MM needs to have the right guardrails in its manual processes and algorithms to avoid losses. MMs don't want to be in a position where they're betting on a market direction (i.e. buying or selling too much of a stock at the wrong price).

Zillow Offers was unprepared for volatility

What happened with Zillow Offers is a case of an MM algorithm that was drastically unprepared for volatility.

The stimulus-filled pandemic economy resulted in a super hot real estate market with a lot of upside price volatility. Home prices were surging everywhere in the country. Zillow Offers found its market making algorithmic model incapable of capitalizing on this hot market and was often underbidding. As such, they started earning on average a 5.76% profit (source) on each house flipped in Q2 2021, rather than the 2% profit they were targetting. 5.76% might be good, but it was clearly not at a volume Zillow expected.

During a volatile market, MMs tend to widen their bid-ask spread to reduce risk. This makes sense, since a wider spread means that they are paying less and selling for more. If the market moves against them quickly, they reduce the chance of bad buys or sells.

However, what Zillow Offers did in the face of volatility was not to maintain a wide spread, but to narrow it. Specifically, the team decided to bid more aggressively for houses so that they can reach a desired transaction volume. In effect, they updated their MM model to overfit for a volatile past. Unfortunately, volatility is often transient, especially in systems heavily influenced by powerful government institutions like the Federal Reserve. In Q3 2021, volatility in the real estate market dropped significantly and prices stopped surging.

Zillow Offers, being unprepared for volatility, was again slow to react and continued to overbid for homes in Q3 2021. Very quickly, this resulted in a massive inventory build-up of overpriced homes that became untenable for the business.

What Zillow should have done instead

Zillow approached the market maker business with either too much ignorance or complacency. They were sorely unprepared for volatility when that's the most important thing an MM needs to prepare for.

One thing they should have done to run their market making algorithmic model through as many different market scenarios as possible the understand the model's weaknesses, such that they can either improve it or know when to manually hedge against potential problem scenarios.

Lacking a proper MM model, Zillow should've realized that they needed to reduce risk during high volatility, as most MMs do. Instead, they chose to increase risk by updating the model to bid more aggressively for homes.

Finally, Zillow shuttering Zillow Offers and trying to unwind its entire portfolio of homes in one go after a bad quarter appears to an external observer as a huge overreaction. Shutting down the business division and laying off 25% of the company's staff is not only a huge blow to morale, but also squanders a great opportunity to scale back volume, learn, and improve its MM business. Zillow is still one of the best companies to be a real estate MM and it's not impossible to do so, as various other companies like Opendoor has shown. In addition, trying to offload a massive real estate portfolio in one go just exacerbates the failure. The market doesn't have enough liquidity to support this sudden flood of offers and Zillow will probably have to settle for abysmal prices.

Having shuttered its iBuying business, a business that it once advertised as having the potential to bring in $20 billion a year, Zillow needs to find a new growth narrative for the market. Growth companies are often measured by their Price to Sales ratio (PS ratio), which is a company's market cap divided by its trailing 12 months (TTM) of revenue. At its peak during the pandemic, Zillow reached a PS ratio of 9.1 on $3.4B of TTM revenue. As the real estate market cooled, and after the recent quarter's bad news, it's now at 3.19 (source).

Furthermore, Zillow's primary business of being an online real estate marketplace isn't a secure one. The business doesn't have a large moat and there are many competitors nipping at its heels, including Redfin and Trulia.

Put together, Zillow appears to be a dud at face value, at least for the short term.