FinanceTLDR
Software Engineer and Finance Blogger
"An investment in knowledge pays the best interest." - Benjamin Franklin
The Best Trade of Q1 2021
Alibaba is being investigated by the CCP. Buy, hold or sell?
Simple & Comprehensive Trading Guide
View All

Tesla's stock price increased by 8.22x this year. If you bought $10,000 worth of TSLA at the start of the year, you'd have about $82,200 now. In comparison, the S&P500 only increased by 1.15x. This year's stellar performance has bolstered the convictions of TSLA's ardent fans while silencing its critics. Everyone in between is left scratching their head wondering how a stock is able to appreciate so quickly without a similar increase in business metrics, which have only seen modest growth compared to price. It's Q3 2020 revenue was $8.771B, a 39% increase from Q3 2019. In the same 2020 quarter, it delivered 139,300 vehicles, a 43.6% increase from the same quarter last year. It's clear that TSLA's price has long decoupled from business performance. This has caused, and was also caused by, a bifurcation in investor sentiment for the company. TSLA bulls have celestial expectations while TSLA bears believe the stock is in a decade-defining bubble.

To a retail investor, this bifurcation is tumultuous and it's hard to extract signals from the noise. Do you buy, hold, or sell? This article clears the fog and presents a 2021 TSLA trade plan for the retail investor. 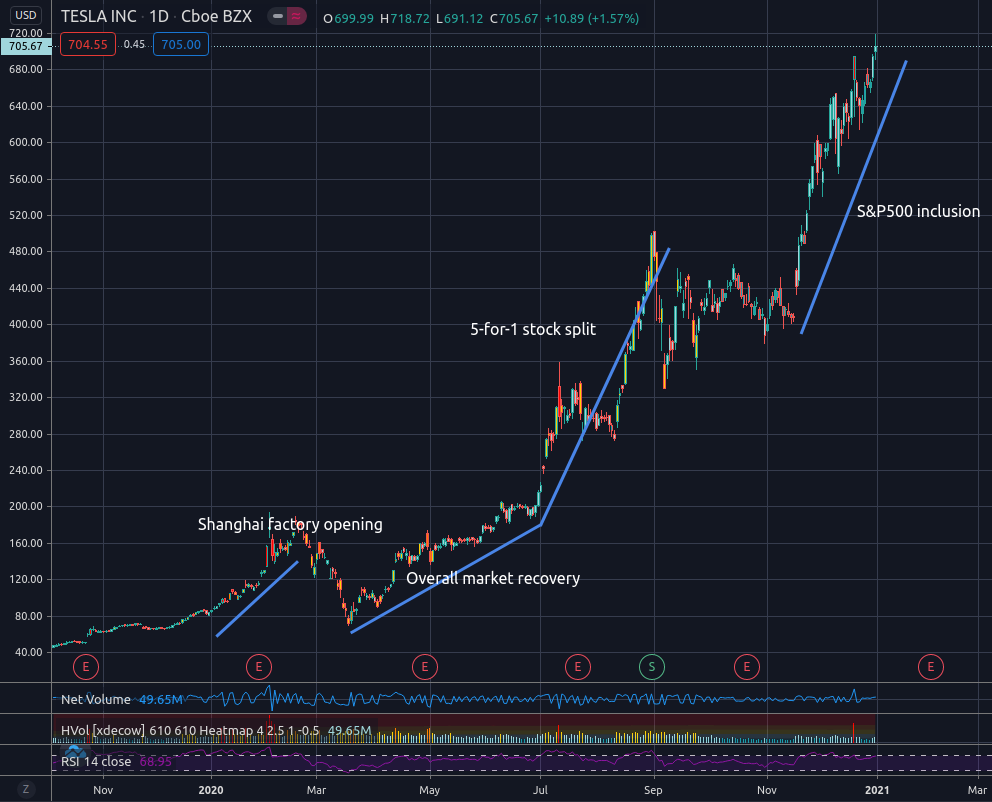 What moves the stock?

Knowing that TSLA has decoupled from its business metrics, an inquisitive investor will wonder what drives the stock's price. The answer is partially uncovered by understanding who owns the stock. According to Macroaxis.com, as of December 30th, Institutions own 42.52% of Tesla's stock, the Public (i.e. Retail Investors) owns 37.46%, and Insiders own 20.02%.

TSLA's institutional investor base consists of large passive funds such as funds tracking the S&P500 (which recently added TSLA) to more active hedge funds specializing in innovation and growth. Passive funds increase the buying pressure of TSLA while adding minimal selling pressure. Today, the majority of the workforce regularly contributes their salary to passive funds for retirement and said funds are unlikely to trim their holdings of a stock unless during an infrequent rebalancing event. The active funds that remain invested in TSLA tend to have celestial expectations for the company and are also unlikely to sell at this valuation. For example, billionaire fund manager Ron Baron believes that Tesla, currently at a $659 billion market cap, should be a $2 trillion dollar company. Another major fund manager, Cathie Wood, gives TSLA a 2024 price target of $7,000. Assuming minimal changes in total float, that equates to almost a $7 trillion dollar market cap!

So TSLA's institutional investor base are hardly sellers of TSLA and still believe there is significant room for the stock to run despite its incredible 2020 performance.

What about TSLA's retail investor base? This question is easily answered. Over the years, TSLA has built a diehard fanbase that has equally high, if not higher, expectations of the company than some of the institutional investors. Some people believe the company's CEO, Elon Musk, has developed a cult-of-personality. Tesla's cult-like fanbase manifests online as a large number of YouTube channels and online forums dedicated to the company, and in a broader sense, Elon Musk. For example, the main Tesla subreddit, /r/teslamotors, has more than 901,000 subscribers at the time of writing.

Of the remaining 20% of TSLA stock, the majority is held by Elon Musk and he's certainly not eager to sell noticeable quantities of his holdings given the ensuing bad PR.

So if investors are hesitant to sell TSLA, TSLA is bound to appreciate aggressively every time there's good news and appreciate slowly in the absence of news as passive funds and its ardent fanbase continue to buy in. In other words, TSLA is a heavily news-driven stock with a heavy bias for upside.

This is exactly what we saw in 2020. TSLA entered the year having solved its Model 3 production problems while managing to maintain solvent. This act alone unceremoniously discarded a dark cloud over the company on whether it'll manage to produce cars at scale before its heavy debt-burden catches up with the company's treasury. With that, the path was clear for a string of good news to catapult the stock to grandiose heights. They included the opening of the Shanghai factory, the 5-for-1 stock split, the S&P500 inclusion, and record sales and deliveries in the third quarter. Even good news from the tangentially-related company SpaceX, who Elon Musk is also the CEO of, has been positive for TSLA.

The Plan and Headwinds

Tesla will enter 2021 with boosted by tailwinds from its 2020 success. If Tesla maintains its current pace of execution, ceteris paribus (fancy business major speak for "all other things being equal"), its stock price is expected to continue to appreciate and befuddle its critics. Tesla is finally able to produce Model 3's at scale, has a foothold in the Chinese market, and is readying to launch the Cybertruck to a red-hot North American pickup truck market. In addition, like Pavlov's dogs, 2020 has conditioned investors to not bet against TSLA with the stock shrugging off multiple negative news events like the COVID-19 pandemic, the expected post-S&P500 inclusion sell-off (which never happened), and the Apple EV announcement.

In 2021, it's recommended to continue to avoid shorting Tesla, no matter how tempting.

With that said, there are significant headwinds facing Tesla that any long positions should be aware of. Tesla currently has an 81.66% market share of the US EV market. The biggest risk going into 2021 and beyond is the significant ramp up in EV and battery technology competition from legacy auto manufacturers. Tesla's stock price has only emboldened the executive teams of these companies to pour significant resources into their EV businesses. GM, Volkswagen, and Ford are leading the pack. GM has invested $27 billion into its EV business and is planning to launch 30 EVs by 2025. Two EVs have already been announced: the Cadillac Lyriq and the Hummer EV, with both receiving an overwhelmingly positive public response. GM has also developed an in-house battery technology called Ultium that's the central pillar for its 2025 plan. A step above GM, Volkswagen is investing $41 billion into its EV business and plans to launch 70 EVs by 2030. It's also aggressively investing in battery technology. For example, Volkswagen has a large stake in QuantumScape, a company that claims to be developing a revolutionary solid-state battery technology. Last but not least, Ford is investing $11 billion into its EV business and plans to launch 40 EVs by 2022. Deliveries of its flagship EV, the well-received Mustang Mach-E, is already underway. An honorable mention goes to Apple, which plans to start production of its own EV in 2024.

If TSLA is a news-driven stock, a growing string of negative news about the company's shrinking North American and European market share should apply downward pressure on price. The worry is that investors are so exuberant about the stock's stellar 2020 performance that the effects of emergent, serious competition from legacy auto manufacturers are heavily discounted.

In 2021, although it remains very bullish for TSLA going into the first half of the year, it's recommended to avoid aggressively starting or adding more to an existing position in the latter half of the year. This is when the rate of competing EV products entering the North American and European markets is expected to accelerate. Prudent investors should watch how the public reacts to this large structural EV market change before making any moves.