GameStop's stock has been an absolute rollercoaster ride this year. Aside from the memes, what is it really worth?

Hence, GameStop was to be shorted to obsolescence.

This was a sensible plan with a major weakness. GameStop has ample runway left for a turnaround and any sign of progress towards reinvention would blow the short thesis out of the water. The company has a strong balance sheet ($1.63B in cash at the end of 2019, $500 million at the end of 2020) and strong albeit declining cash flow ($434.9M net operating cashflow in 2019 and $325.1M in 2020). What I found most surprising was GameStop's revenue, which was $8.29B in 2019 and $6.47B in 2020 (despite declining physical game sales AND COVID shutdowns).

It turns out, physical game sales are far from irrelevant. The affluent class with gigabit internet connections and top of the line gaming PCs might consider buying physical games as an activity of a bygone era but main street begs to differ. The continued relevance of physical game sales props up GameStop's financials and it's nowhere close to bankruptcy.

Add to this the myriad of activist investors urging the company to reinvent itself (e.g. Ryan Cohen and Scion Asset Management) and we see that GameStop's $300 million market cap in 2020 is not only laughable, but borderline insane.

To cut to the chase, I think the market has set up GameStop with all the right pieces to complete one of the greatest reinventions of a company we'll ever see. 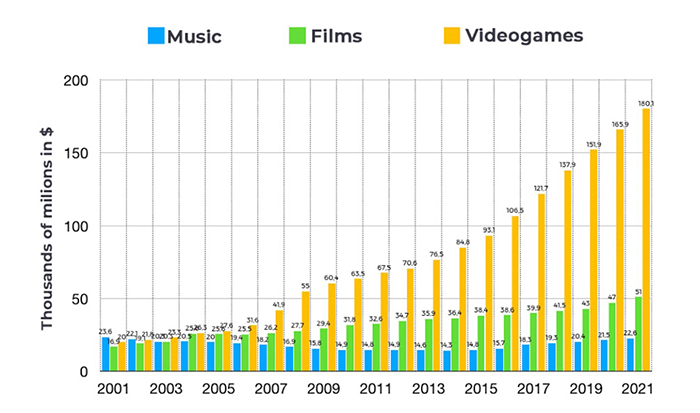 GameStop's large brick-and-mortar presence enables it to employ a no-competition omnichannel strategy (both online and physical retail) to become potentially the largest video game retailer in North America and Europe. Omnichannel retail is widely considered to be more effective than only-online or only-physical retail. GameStop's singular focus on video games and existing brick-and-mortar presence makes it the best positioned company to create "the Apple Store of Video Games".

A strong potential for growth is irrelevant if there's a lack of will to change. Do GameStop's board and executives want change? We see that the once half-hearted initiative to pivot to ecommerce has recently turned into the company's number one priority, undoubtedly pressured by increased scrutiny from the market due to the stock's crazy price action.

In 2019, GameStop appointed George Sherman, an executive with extensive retail experience, as CEO. This didn't fit the ecommerce transformation narrative and suggested that the company is stubbornly sticking with its brick-and-mortar roots. In just the first few months of 2021 alone, GameStop has made major moves to change its board and executive team for an ecommerce future. The most notable of which are replacing the CFO (who was probably opposed to the aggressive spending required to change the company) and giving Ryan Cohen a board seat and appointing him to lead the company's ecommerce transition.

Regardless of where they stood in the recent past, GameStop's leadership team is undoubtedly committed to change today.

A great way to find a target price for a stock is to compare it with similar companies. For GME, we can compare it with Chewy (ecommerce pets store co-founded by Ryan Cohen), Activision, EA, and Best Buy.

We will use the stocks of Chewy, Activision, and EA as aspirational targets, and Best Buy as a lower bound, with the assumption that GME doesn't go bankrupt. 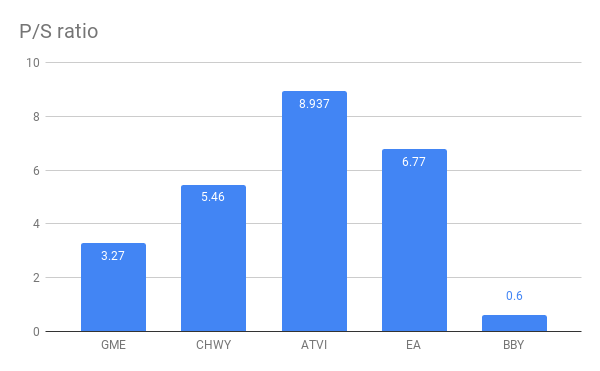 Even at a relatively astronomical price of $260, GME still has a significantly lower P/S ratio than CHWY, ATVI, and EA. If we assume GME is likely to turn the ship around, then $260 actually appears to be a decent price if we discount the chance of failure. The continued relevance of physical games, the impending reopening of the economy, and retail investor hype also add to the bull case.

BBY, being an established electronic goods omnichannel retailer, can serve as the P/S ratio lower bound. In such a scenario, GME avoids impending disaster but only experiences mild success. At a 0.6 P/S ratio, GME has a price of $47. This is why GME was an amazing buy at under $50 in February.