FinanceTLDR
Software Engineer and Finance Blogger
"An investment in knowledge pays the best interest." - Benjamin Franklin
Simply Explained: Wealthfront's Risk Parity Whitepaper
What The Heck Is The Repo Market?
Robinhood (HOOD) Deep Dive: Can The Stock Be Saved?
View All

On April 20th, the May WTI Crude Oil futures (i.e. CLK2020) turned deeply negative, trading down to -$40 a barrel. This is the first time in history the WTI Crude Oil futures contract turned negative and, to the best of my knowledge, is also the first time any commodities futures contract turned negative. At the same time, the popular and highly liquid USO (United States Oil Fund) ETF continued its steep downward trend, with its price crashing through support at $4.00 and settling at $2.50.

How did CLK2020 collapse, why is USO on life support, and what does this all mean for the economy moving forward? I attempt to unravel the convoluted layers of this proverbial onion; try not to cry.

West Texas Intermediate (WTI) crude, also known as Texas light sweet, is a grade of oil used as a benchmark in oil pricing. It's one of the three main oil pricing benchmarks worldwide, with the other two being Brent Crude (North Sea) and Dubai/Oman crude (Middle East).

A futures contract is an agreement to buy or sell something at a predetermined price in a future date. Futures contracts can be physically settled or cash settled.

Physically settled contracts involve the delivery of the underlying asset from the seller to the buyer on the delivery date.

USO is one of the most popular ETFs out there that attempts to track the price of WTI crude. Because its difficult for regular (i.e. retail) investors to get exposure to oil prices, USO makes it easy through a low cost of entry and greater accessibility. As an ETF, USO is tradable on most brokers, even on CashApp.

Why did CLK2020 turn negative? 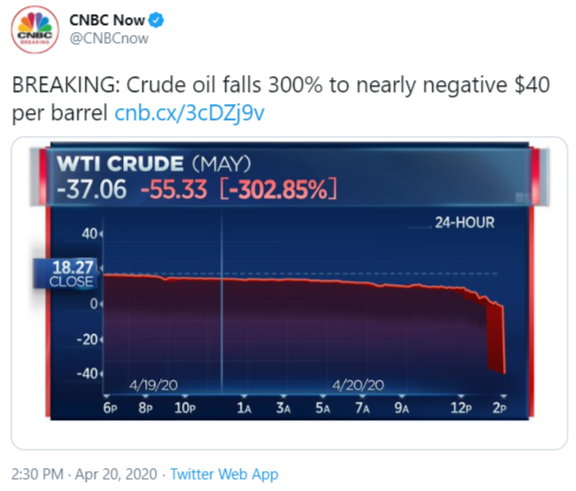 The CLK2020 contract stops trading on April 21st and physical settlement of the contract happens in May. On April 20th, with the contract expiring the next day, panic overwhelmed the market as speculators that couldn't take physical delivery of even a single futures contract (1,000 barrels of oil) had to exit their positions. Thanks to COVID, the demand for oil was anemic and storage was filling up as producers refused to cut oil production lest they cede market share. The anemic demand for oil and lack of available storage percolated through the market and manifested as significant downward pressure on CLK2020's price. The typical market participants that were capable of taking physical delivery of oil had met their conventional quotas and were out.

This stranded many speculators with CLK2020 long positions that were ticking time bombs. Speculators had great expertise in trading futures contracts but zero expertise in managing thousands of barrels of oil. When expiry time drew near and long positions needed to be off loaded, no one was on the receiving end. This started a panic that pushed prices down below $0 because the speculators had to sell lest they wake up with a caravan of trucks filled with oil at their doorstep.

The conjecture is that this market rout is driven more so by botched speculation than a lack of storage space for oil. Although available storage was at historic lows, the United States is a country with 3.797 million square miles of land and space can always be found for oil, especially if it's at -$40. This is exemplified by the fact that CLK2020's price was only negative for about 6 hours before sharply rebounding back to positive territory. On expiry day, price recovered to almost $10 a barrel.

USO or US Woe?

Most retail traders can't trade the WTI crude futures market. Only a few brokers provide access to the market and even if a trader did have access, they need a lot of capital to start. Each futures contract is 1,000 barrels of oil and, prior to COVID, a barrel was trading at $60. As such, just one futures contract would cost a trader $60,000.

USO aims to give retail traders exposure to WTI crude's price through a low unit cost ETF. Instead of owning actual barrels of WTI crude, the ETF tries to track WTI crude's price via the buying and selling of futures contracts. At any moment in time, USO owns a large portfolio of WTI crude futures with the nearest expiration date, also known as front-month contracts. As the expiry date nears, USO avoids taking physical delivery by selling its position of front-month contracts and buying the next month's contracts. This is known as "rolling over" a futures position. Theoretically, this methodology allows USO to closely track the price of WTI crude.

However, the astute reader might question the sustainability of process, given that if the next month's contracts are more expensive than those of the front-month's, USO will hold less and less oil each time it rolls over. This is where a little bit of futures market knowledge comes in handy.

A key assumption was broken

There are two main types of futures markets. The first, known as contango, is a market where contracts that expire in later months are more expensive than those that expire in more recent months. This happens because sellers incur what's called "costs of carry" to hold inventory for longer. Some examples include capital opportunity costs (not being able to get money earlier to do other things), storage costs, and insurance costs. The second type of futures market is known as backwardation. In such a market, the contracts of later months are cheaper than more recent months. This happens when there is significant demand for the underlying asset. Buyers are willing to pay a premium to get assets earlier, even if that means giving sellers a better deal.

Oil is the primary resource powering the global economy and there is constantly significant demand. As such, the WTI crude futures market was always in a state of backwardation. When COVID hit, demand for oil dropped precipitously and the market entered into a state of extreme contango (at one point, CLM2020 was $61 more expensive than CLK2020). USO works when the WTI crude futures market is in backwardation but not in contango. In the latter scenario, USO has to buy more expensive oil contracts every time it rolls over and thus owns less and less oil over time. This causes the fund to underperform with respect to WTI crude, which it's supposed to track.

The key assumption USO makes to track WTI crude is that its futures market is in backwardation. COVID turned the market upside down and presented an existential crisis for USO. In response, USO recently changed the ETF's structure several times to dampen the impact of an extreme contango market, such as by buying future contracts that were more than one month out for its roll over.

Despite the woes of USO, the ETF experienced a significant increase in buying volume directly before, during, and after the dramatic collapse of CLK2020. In fact, USO was the most-bought stock on Robinhood, a broker with predominantly millenial users, during the week of CLK2020's collapse.

How could there be more buying of USO when the ETF was facing an existential crisis due to a futures market in extreme contango with no sign of returning to backwardation anytime soon? With its fundamental assumption broken, buying USO now is not equivalent to buying exposure to WTI crude, it's equivalent to buying a broken derivative product.

The best explanation for this is uninformed buying. Despite operating on the correct pretense that oil prices will recover soon, many inexperienced traders are executing this trade idea through USO with the false assumption that it's tracking WTI crude. Instead, the ETF is currently fighting for its survival.

How is this relevant to your net worth?

The finance and macroeconomics community on Twitter (aka fintwit) was awash in commentary after CLK2020 went to -$40. Some macroeconomy commentators made doom-and-gloom claims that CLK2020 was signalling a dire problem in the economy that the stock market was not yet reflecting, and a precipitous fall awaits. They say that the never-before-seen negative oil price was a symptom of how over-financialized our economy has become through an overdiluted dollar.

As crazy as negative oil price are, this event was more symbolic than impactful for the economy. CLM2020 was only negative for about 6 hours, during which time there was very little volume. In other words, only a relatively small amount of trading occured when prices were negative. Price diverges the most from the real state of a market during low volume trading. For example, if I paid 1-800-GOT-JUNK to take away a couch, it doesn't mean that the couch's fair market value is negative, it was only negative for my local and very specific circumstances. The same is true for CLM2020. In fact, CLM2020's price rebounded as dramatically as it fell and settled at almost $10 before expiry.

Only trade and own things that you understand!

Another takeaway from this event is to only trade and invest in things that you understand. Don't be like the uninformed millenial traders on Robinhood buying USO when the WTI crude futures market is under extreme contango. If you're buying financial assets such as ETFs that have fragile underlying assumptions, you put yourself at risk of holding a bag of junk when those assumptions break. Being frivolous with your investments can be extremely costly.

FinanceTLDR
Software Engineer and Finance Blogger
"An investment in knowledge pays the best interest." - Benjamin Franklin
Continue Reading
Simply Explained: Wealthfront's Risk Parity Whitepaper
By FinanceTLDR
Posted almost 2 years ago
What The Heck Is The Repo Market? Why Did The Federal Reserve Funnel...
By FinanceTLDR
Posted almost 2 years ago
Robinhood (HOOD) Deep Dive: Can The Stock Be Saved?
By FinanceTLDR
Posted 12 days ago
$HOOD
Contact FinanceTLDR
Subcribe to the Newsletter!
Get FinanceTLDR articles the moment they're published, straight to your inbox. Bringing you high quality stock market research with easy-to-read explanations. Learn what stocks we're interested in and why we see potential.
Subscribe For Free
"The biggest regret in life is not trying and failing, but not doing or knowing what you should've."