FinanceTLDR
Software Engineer and Finance Blogger
"An investment in knowledge pays the best interest." - Benjamin Franklin
TSLA - The 2021 Trade Plan
The Best Trade of Q1 2021
Alibaba is being investigated by the CCP. Buy, hold or sell?
View All

Since its September IPO, Palantir's stock price increased by more than 200% from $10 to a peak of $33. This was on the back of significant retail investor fervor. For example, the stock was a favorite of the WallStreetBets subreddit with days when bullish posts and memes of the stock flooded the forum's front page.

To many people's chagrin, the stock unexpectedly sold off without any significant news in the last week of December. Here's why. 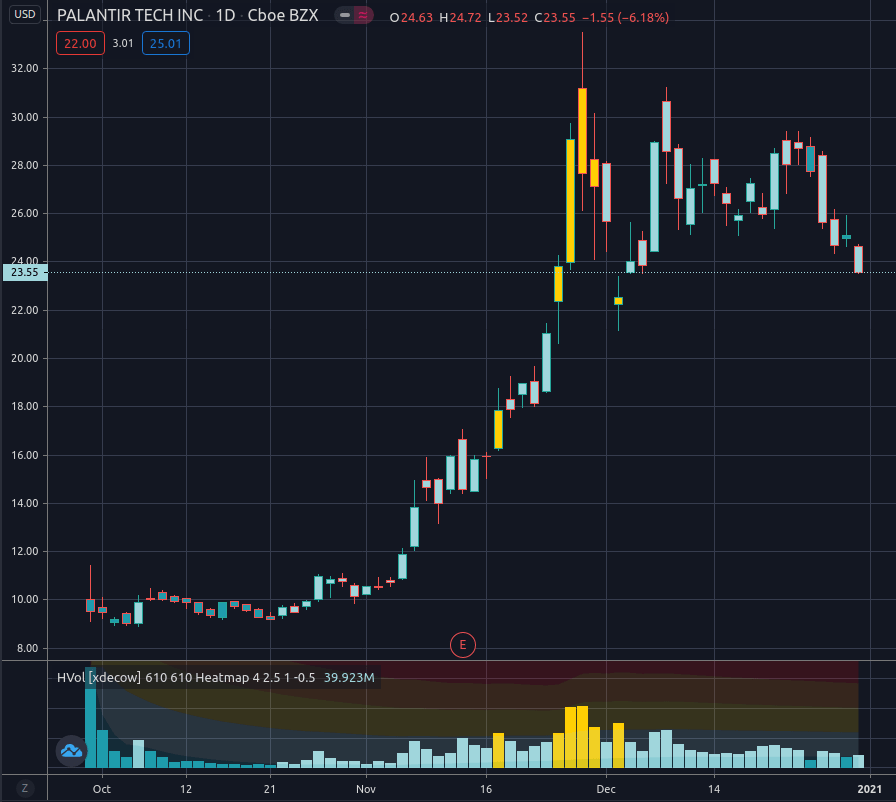 Everybody that wanted in, was already in

According to finviz.com, retail investors own 79% of PLTR's float (shares available for trading), suggesting that much of the price increase from $10 to over $30 in the past 3 months was driven by said class of investors. It's unlikely that risk-sensitive institutions would be heavily involved in such a feverish stock. For example, Palantir's market cap increased by more than $10 billion in a couple days after the announcement of a $44 million 3-year partnership with the FDA. $44 million over 3 years is a rounding error relative to its annual revenue.

After hitting its $33 peak, PLTR pulled back and consolidated at a $25 to $29 price range. During this time, people continue to be bullish for the stock with many believing that it'll soon break all-time-highs again. Unfortunately, at least in the short term, everyone that wanted in was already in and the lack of new buying primed the stock for a sell-off. Another way to spot this is when the infamous online trading forum, the WallStreetBets subreddit, starts being filled with bullish commentary for the stock. On a few days in November and December, the majority of the subreddit was talking about PLTR. If you think about it, users would only create a bullish post or upvote bullish posts of a stock if they already had a long position. 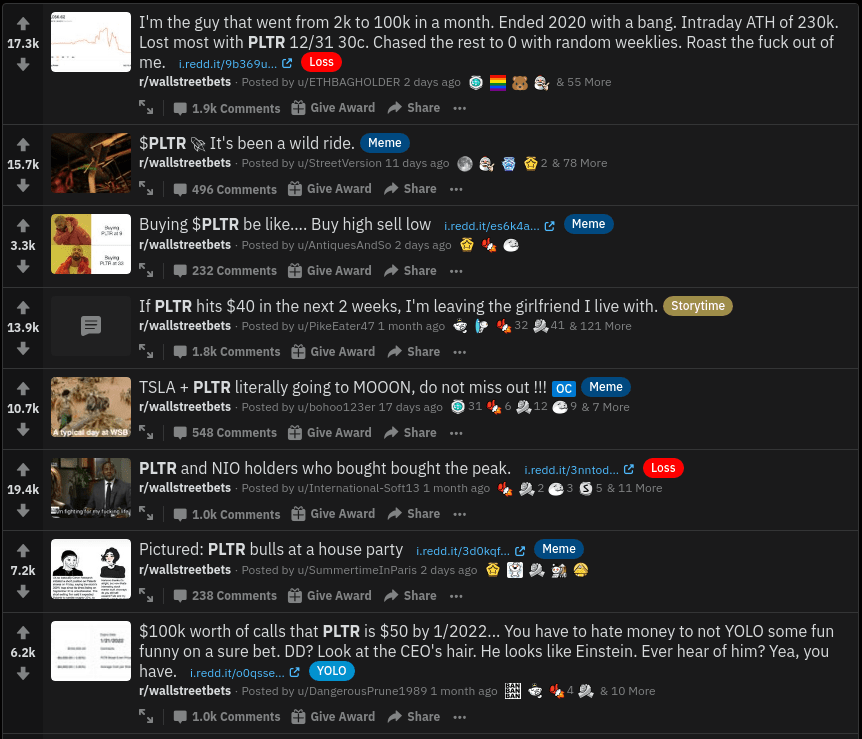 Once the buying pressure waned, a small amount of selling compounded with other bearish factors discussed below were sufficient to trigger large waves of selling.

Options market makers are institutions contracted by an exchange to supply liquidity to the options market, even when there's no willing external buyer or seller. Market makers make money by buying or selling options to traders at slightly worse prices than the actual price, and pocketing the difference. As such, they aren't interested in making a directional bet on a stock's price by being short or long options and whenever you sell or buy an option from them, they need to hedge their position.

Even though retail investors own most of Palantir's tradeable shares, institutions do own a non-trivial amount (12% of the float, according to finviz.com) that were mostly acquired during the IPO. These institutions include Morgan Stanley, BlackRock, and Soros Fund Management. Funds have a target ownership percentage for each portfolio stock and when its price increases or decreases dramatically in a short period, the fund needs to rebalance by selling or buying said stock. Rebalancing happens either at a fixed time period or when an imbalance threshold is crossed. Because PLTR's price appreciated so rapidly in just a couple months, it probably fell victim to year-end institutional rebalancing.

Because PLTR's price increased so rapidly in 2020, traders are expected to sell in 2021 to defer taxes for one year. It's likely that some traders attempted to get ahead of this expectation by selling a few days before December 30th (trades executed on and after this date settle in 2021). PLTR's price started to fall off a cliff on December 28th and it kept falling until the year's last trading day on December 31st. As such, the selling on the 28th and 29th is partially attributed to traders frontrunning new-year-profit-taking while the selling on the 30th and 31st is new-year-profit-taking.

Palantir's IPO was a direct listing meaning that it only made existing shares sellable on the market. No new shares were created and sold. This means that insiders (founders, employees, and VCs) own most of Palantir's shares. During the IPO, these insiders could only sell 20% of their holdings and the other 80% are locked up until after 2021's first earnings report. Unsurprisingly, traders expect more selling than usual when these shares unlock since 80% is a lot of shares. Long time PLTR holders will want to divest at least some of their holdings. It's plausible that, like new-year-profit-taking, traders are selling early to get ahead of the lock-up period ending. 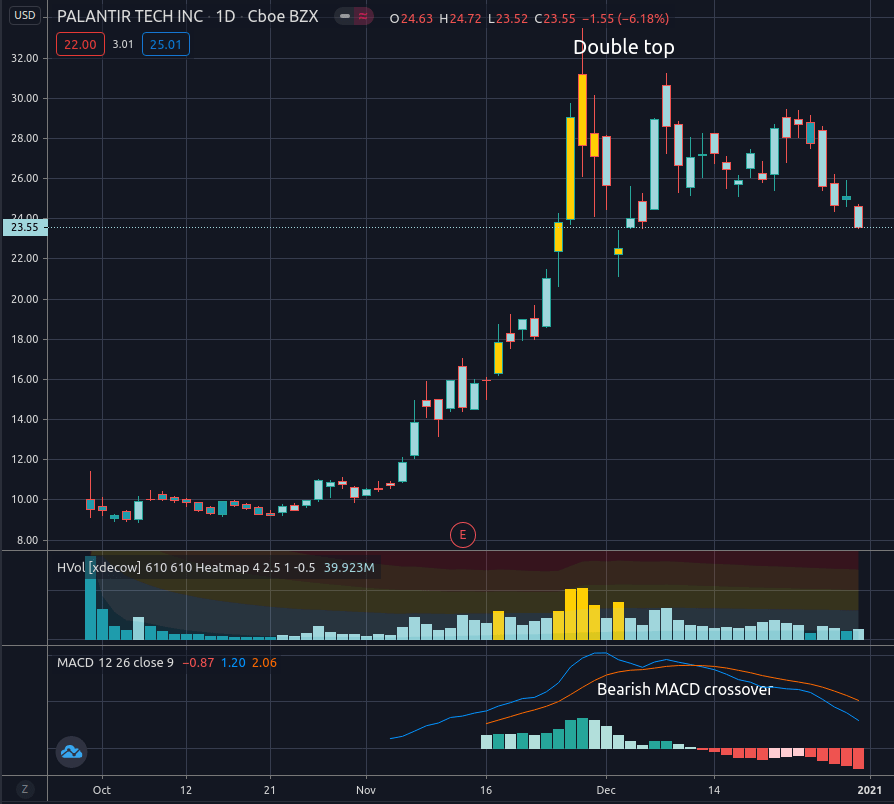 Technical analysis (using price charts to determine when to buy or sell) is controversial but still popularly used to predict short term price movements. PLTR's chart displayed several sell signals ever since it peaked at $33. For one, the chart has a giant double top with rejections at $33 and $31 on November 27th and December 8th respectively. A double top is a very popular sell signal. Bullish momentum and volume has also waned since the price peak with daily MACD (a technical indicator) becoming bearish on December 10th. Falling momentum is no bueno for a stock driven by momentum.

Markets are complex systems and we often don't know what the main reason for a sell-off was, especially in the absence of news. However, it's always useful to make educated guesses as an exercise to expand our predictive toolbox so that we can get ahead of major market moves in the future.