FinanceTLDR
Software Engineer and Finance Blogger
"An investment in knowledge pays the best interest." - Benjamin Franklin
Inflation Is Not Here to Stay
RKT: Be Careful Of Complexity
SoFi: Overpriced or 10x Potential?
View All

If you have a US stock brokerage account, you can easily buy shares in hundreds of different Chinese companies. It's no different than buying a US-based company. Just open the account, pick a ticker, and hit buy. However, few people realize that owning US-listed Chinese stocks is a far cry from owning the actual Chinese company. The company listed on US exchanges is a parody of the real company that practically gives you zero economic or controlling interest. Although Chinese growth might be too good to pass up, investors should be fully informed about what they're buying.

The Chinese government forbids foreign investment in domestic companies that operate in a list of industries. This list is huge and covers many Chinese companies, including most listed in the US. So how do they manage to get on US exchanges if it's illegal according to Chinese law? They do it through a convoluted corporate structure called a Variable Interest Entity (VIE) that involves (sometimes) shady domestic contracts and corporations domiciled in tax-haven island nations.

This is typically how a foreign-listed Chinese VIE is set up. 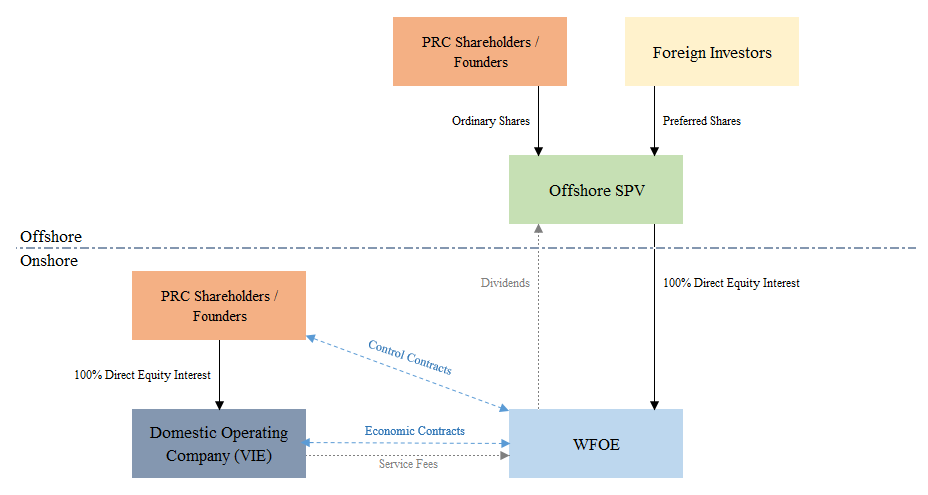 The real Chinese company creates an offshore holding company in a tax haven and business-friendly jurisdiction like the Cayman Islands with the same name as the real company (e.g. "Alibaba Group Holding Limited" in the Cayman Islands). The real company then creates another domestic company known as a Wholly Foreigned-Owned Enterprise (WFOE) that the offshore holding company fully owns.

For foreign investors in the VIE, these domestic contracts are the only financial instruments that provide a semblance of owning the real company. Buying US-listed stocks of these VIEs is ultimately buying participation in these contracts. Because the WFOE doesn't own anything but instead is engaged in contracts with the real company, China's foreign-ownership restrictions technically don't apply and it's "allowed" to be owned by an offshore holding company.

Legally, these WFOE contracts fall into a grey area in Chinese law and have a tenuous existence. They are illegal by precedence (though the Chinese government practices civil law), but the government more often than not turns a blind eye to them because of how lucrative they are in generating foreign investment, among other domestic benefits.

Why US investors in Chinese stocks should worry

Illegal by law and legal precedence

Chinese law has a specific statute (Article 52 of the PRC Contract Law) that could easily be applied to VIEs, namely that any contract that intends to avoid a law is not enforceable. The contracts that WFOEs have with the real company can be classified as such since, in spirit, they allow foreign ownership in domestic companies forbidden to foreign interests.

However, a law is only relevant if enforced and China mostly turns a blind eye to VIEs. Keyword: mostly. China has turned on VIEs when convenient. The 2011 GigaMedia case is a stark example. GigaMedia is a NASDAQ-listed Singaporean company that acquired a controlling interest in a British Virgin Islands domiciled VIE called T2CN, an online gaming company in China.

When GigaMedia's board voted to replace the founder of T2CN as CE0, the founder fought back by going to a Chinese court and claiming that the VIE contracts were legally invalid. The court agreed and found the VIE contracts violated Chinese law prohibiting foreign investors from exercising control over online gaming businesses in China, referring back to Article 52 of the PRC Contract Law (Lexocology).

A scary example is how Jack Ma, in 2011, separated Alipay from Alibaba and took it under his control. Alipay was growing at breakneck pace as China's top payments company. This obviously caused significant damage to Alibaba's investors, especially investors in its VIE. At the time, Yahoo owned 40% of the VIE while Softbank owned 30%. Neither company had any legal sway in China to reverse this decision or obtain significant compensation for damages.

If the founder of a US company attempted to spin off a high performing business segment for themselves, they would be sued to high heavens by their investors and probably blocked from doing so.

Another problem with investing in Chinese VIEs is the difficulty for these companies to return capital to foreign shareholders due to tight capital controls. The Chinese government is especially sensitive to capital leaving China and have significantly tightened capital controls over the last decade in the face of increasing capital flight.

The most direct way a public business returns capital to shareholders is via dividends or share buybacks. However, both of these methods require the Chinese company to transfer US dollars to its US shareholders, which is incredibly inconvenient and tenuous to do so in the current Chinese regulatory environment.

However, there are ways around this problem. The easy way out is to tell US shareholders that the company is reinvesting the majority of profits for growth (aka the Amazon way). There are also complex financial arrangements that tip toe around regulations to make the money transfer possible. For example, to expedite a one-time $201 million cash dividend payment, online gaming operator Changyou (CYOU) used offshore bridging bank loans that were secured by yuan-denominated onshore bank deposits (MorningStar.com).

What's the bright side?

It's not all doom and gloom for Chinese VIEs. Although their existence seems to be incredibly delicate, and the rug could be pulled from under foreign investors at a whim, the situation is less uncertain than it appears. Afterall, Alibaba ($BABA) is still able to fetch more than a $450 billion market cap with a 20 P/E ratio at the time of writing.

The underlying rationale for so much money to continue investing in $BABA (and other VIEs) is that despite the Chinese government's protectionism and thirst for control and optionality, there are so many factors driving the government to maintain VIEs. First of all, VIEs are a super easy way to secure foreign investment into China. Billions of dollars flow into China annually via VIE IPOs and additional share offerings. Second, China wants to be a global superpower, and that means having a respectable, stable, and trustable financial sector. No country can become or maintain global hegemon status without a globally integrated financial sector. Pulling the plug on any major VIEs will turn back the clock on China's global financial integration by decades and significantly reduce foreign investment. Finally, despite stringent capital controls, there are still ways for Chinese companies to return capital to investors, and that's a high priority for respectable Chinese companies that want to maintain a solid reputation overseas to fetch a higher share price and grow a global business.

There are certainly very good reasons to not invest in Chinese VIEs, and good reasons to do so as well. Regardless of the decision made, it's always good to be fully informed before taking action. Despite regulatory ambiguity and tensions, many investors have decided that the rapid growth in China is too good to pass up, and optimism is usually the way to go in our highly globalized world.