FinanceTLDR
Software Engineer and Finance Blogger
"An investment in knowledge pays the best interest." - Benjamin Franklin
Zillow’s $550 Million Mistake
How to Get Rich Trading (without getting lucky)
This Is the Next Tesla. Here's Why
View All

The current retirement savings dogma in the US is to maximize your contributions to a retirement savings account (401k or IRA) and have the money compound tax-free until you can withdraw after the age of 59.5. The general purpose of retirement accounts is to save on taxes.

In addition, the asset allocation dogma for retiring is to be overweight US equities early on and slowly transition to bonds as you age. The reasoning is that equities provide better returns but are riskier, and thus are more suitable for younger people.

This is the financial advice you'll hear from pretty much any mainstream financial advisor, and it's repeated often in everyday personal finance discussions.

I introduce new ideas in this article that either build on or challenge these dogmas, such that one can further optimize and hedge their retirement savings and get ahead of mass market ideas.

What Happens When US Equities stop appreciating?

Ask any mainstream financial advisor about what returns you can expect from US equities and they'll mostly likely say 7% annually (inflation adjusted). They also recommend that retirement portfolios start out overweight US equities and slowly transition to bonds as the investor ages. A 7% annual return sounds awesome, especially in a super low interest rate environment (US 30-year treasuries are only yielding about 2% annually right now).

But where does this 7% number come from? And how dependable is this number for retirement planning? The 7% number comes from calculating the average returns of US equities from the 1920s to today. Nominally, that results in a 10% annual rate of return. Assuming inflation is about 3% each year and you have the 7% number.

Is it safe to assume that if US equities returned 7% on average in the last 100 years or so, that it'd continue to do so in the next 30 or 40 years until your retirement? This seems like a risky proposition, and an overfitting of the past. The past 100 years is certainly a very different world than the next 100 years. What if the S&P500, for example, started acting like the Nikkei or FTSE, which returned a mere 63% and 13% in totality (not annual) since 2000 (a 7% annual return in 21 years yields a total return of 314%).

So things may not be as simple as just maxing out contributions into a retirement account and expecting 7% returns on average, as dogma would have you believe. In the next section, I present a novel way to invest retirement money that's much more risk-free.

US High-Yield Bonds Over US Equities?

I posit that US high-yield bonds are a better alternative to US equities in a retirement account. High-yield bonds are often referred to as "junk" bonds, but don't let the name deceive you. They are just one step down from "investment grade" bonds which are bonds from the most creditworthy of companies... the cream of the crop. Junk bonds are a lot less risky than one might think, and are often from large and well established companies.

So why are junk bonds a better alternative to US equities in a retirement account? Well, first of all, they come with a lot less risk than equities. Bonds represent debt and are guaranteed to pay back the interest and principle if the company doesn't run out of money. If the company does declare bankruptcy, debt holders are always paid before equity holders. As such, even the riskiest debt of a company is less risky than the company's equity. In addition, the Federal Reserve has showed that they're willing to directly support the High-Yield Bond market in a crisis, as they've done during COVID, but not directly support the stock market.

Junk bond holders thus have the most powerful financial institution in the world as an insurer.

Finally, one might be wondering about the returns of high yield bonds. Well they are quite respectable. Vanguard's High-Yield Bond mutual fund (VWEHX) has returned 8.15% annually since inception (nominal value, so about 5% when factoring inflation at 3%). This is even better in a retirement account as you don't need to pay taxes on distributions and immediately reinvest to compound returns.

The vast majority of investments in retirement accounts go into what's known as Target Date Funds (TDF). TDFs are funds designed for retirement. Each fund targets a specific retirement year. For example, Vanguard has TDFs that increase by 5 year incrementals. There's a 2030 fund, a 2035 fund, and so forth. A target date fund has an asset class distribution based on how close it is to the fund's target date. The further away from the target date, the more the fund invests in higher risk assets like equities. As the target date draws nearer, the fund starts to invest in lower risk assets like bonds.

TDFs are vastly popular and quickly growing in popularity. According to Morningstar, Americans have $1.6 trillion invested in TDFs. Vanguard, the largest TDF provider in America, advertises that in 2015, 69% of their customers used TDFs and 42% had their entire account invested in a single TDF. In 2020, these two numbers have soared to 80% and 54% respectively (source).

TDF rebalancing is quite predictable. Vanguard, for example, publishes the target asset distribution of their TDFs. One can determine, based on the previous month/quarter/year's performance of different asset classes, how imbalanced Vanguard's TDFs become and have a rough idea of when they'd need to rebalance. Funds have a very systematic way of rebalancing. They usually rebalance at the start or end of each financial period (e.g. quarter or year) and only if a threshold of imbalance is crossed. With more than $1 trillion invested in TDFs, rebalancing can move markets and you bet hedge funds are constantly vying to frontrun TDFs when they rebalance. The end result is a consistent but hidden transfer of money from retirement savers to hedge fund pockets.

I introduce a novel concept called the "Age Utility of Money" to challenge the almost cult-like idea of maxing contributions to US retirement accounts which lock up huge sums of money that's only accessible past the age of 59.5. I realize that this will be controversial, since seemingly almost everybody recommends and subscribes to the idea of maxing retirement contributions. There's minimal discussion on the tradeoffs and alternatives of doing so.

However, I think that locking up so much money in retirement accounts that is only accessible 6 decades into one's life is a serious decision and shouldn't be accepted at face value because everyone else does it. After all, what's the point of being rich if you can't spend your wealth?

The "Age Utility of Money" is based on the idea that money has different value at different ages. In your prime ages (e.g. 20 - 50), liquid money provides the most value in terms of life enjoyment. Your body is capable of doing a lot more in your prime than when you're past 60. You can eat more types of food, walk and run further, and generally have more energy to do things. Travelling, for example, is much more pleasurable and enriching in one's prime. Spending data by age suggests that the "Age Utility of Money" holds water, since people spend the most during their prime. 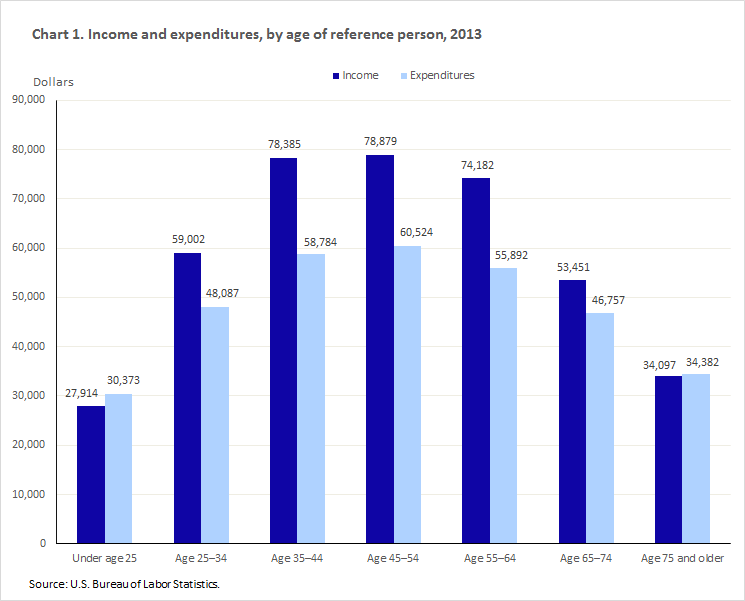 Consumption by age group, from the US Bureau of Labor Statistics (source)

As such, if you can enjoy the most out of each dollar during your prime, it seems counterintuitive to lock as much money as possible in accounts that're only accessible when you're past your prime.

The reason to max out retirement account contributions is to save on taxes. However, how much money are you really saving? According to Nick Maggiulli, the Chief Operating Officer for Ritholtz Wealth Management LLC, you're actually only saving about 0.5% to 0.7% in taxes each year in a 401k (source). In addition, you also have to consider your 401k provider's fees and if the fees are 1%, for example, you're actually worse off putting money in your 401k.

Finally, another counter argument for the "Age Utility of Money" is that spending too much early may jeopardize one's retirement. However, it's totally possible to save outside of a retirement account.

In summary, I want to stress that I'm not saying to ditch retirement accounts altogether. For example, most companies match a certain portion of money invested in 401ks so you should definitely get that match. I'm simply presenting tradeoffs that are missed when taking the conventional wisdom of maxing out retirement account contributions at face value.

A highly popular and effective portfolio allocation strategy is known as "risk parity". The idea is to balance your portfolio by risk instead of dollar allocation, and then leverage up (borrow money) to reach a target rate of return. More specifically, in a risk parity portfolio, you allocate less money in high risk assets and more money in low risk assets such that the portfolio is diversified and the overall risk is balanced.

There's good reason for risk parity's popularity. Wealthfront released a whitepaper on the strategy and demonstrated that a simple risk parity strategy outperformed a traditional 60/40 (Equities/Bonds) portfolio by +46.7% in annual returns while experiencing an equivalent amount of volatility (i.e. risk).

Unfortunately for US retirement accounts, regulations prevent them from being leveraged. As such, many top performing investment strategies such as the risk parity strategy are not available in them. A wider access to portfolio strategies for retirement savings outside of retirement accounts can potentially provide savers with better returns, even accounting for tax savings.

This article is not a criticism on the current retirement savings dogma and merely a motley collection of ideas to help you rethink retirement savings. There is a good reason for ideas to become mainstream dogma. They're generally really good. However, ideas that are dogma result in the loss of nuance, tradeoffs, and optimisations that savvy investors and savers can benefit from.